You are here: News → Judges for the German Dairy Show 2019 have been appointed

Judges for the German Dairy Show 2019 have been appointed 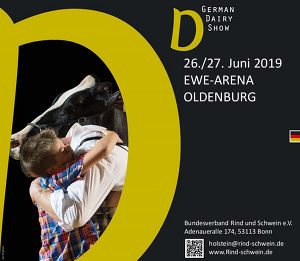 The German Livestock Association (BRS) has appointed the judges for the German Dairy Show. The Holsteins will be judged by Markus Mock, Markdorf. The internationally well recognized breeder has judged the Holsteins at the European Holstein Show 2017 in Colmar and at the German Holstein Show in Oldenburg 2009. The Red-Holstein section will be judged by Andrea Uhrig, Sulzbach. She is a member of the German Judges Pool since 2015 and has already judged several association shows. Thomas Hannen, Tönisvorst is the judge for the Red Cattle and the Jerseys. He also has international and extensive national experience and has been a member of the Judges' Pool since 2009. For the breeds Brown Swiss and Fleckvieh Ernst Grabner from Lower Austria takes over the judgment. The breeding director of the Lower Austrian Cattle Breeding Association also has many years of international experience as a judge.

The German Dairy Show will take place on 26/27 June 2019 in Oldenburg. It is the succeeding event of the German Holstein Show. After the merger of the umbrella breed associations to form the German Livestock Association the breeds Brown Swiss, Fleckvieh, Jersey and Red Cattle are taking part in the judging competition in Oldenburg for the first time in addition to the Holsteins. (BRS)